Last month, I traveled to China.

I went on a mission with two of my friends that run a few of our Bird Dog portfolio companies.

We were there on a dual purpose: to research additional manufacturers in southern China for SnapFon (our mobile phone for seniors) and to negotiate a private label partnership in northern China for Aerionics (our gas detection company—Macurco) based here in Sioux Falls, SD.

Overall, the trip went really well. But let me start by talking about the travel itself.

The crazy part about traveling to China is the time change. A 13-hour time change can do some wacky things to your system. I swear, my body felt the effects for close to a week!

Our total travel time was around 22 hours with the last leg of the trip being 14-and-a-half hours in the air.  We followed that itinerary both to and from China.

The travel is no joke!

The relationship between Hong Kong and mainland China is worth a quick note.

Over the last 20 years, China has been attempting to acclimate Hong Kong into their culture and system while keeping the advantages in place that Hong Kong has enjoyed in the past while under British rule. (That’s a whole discussion in itself, one that I’ll save for another time).

Because Hong Kong has operated in a capitalist environment for so long, the opportunity is high on this island.  Because of that, mainland China residents aren’t allowed into Hong Kong unless approved.  Residents on either side of that border need a passport to pass between Hong Kong and mainland China.

So because our final initial destination was Shenzhen, the mobile phone manufacturing capital of the world, we wanted to avoid “landing” in Hong Kong only to travel 5 miles to the Chinese mainland border which required passport control again.

To do this, we took a 30-minute ferry from the Hong Kong airport to a Shenzhen port. 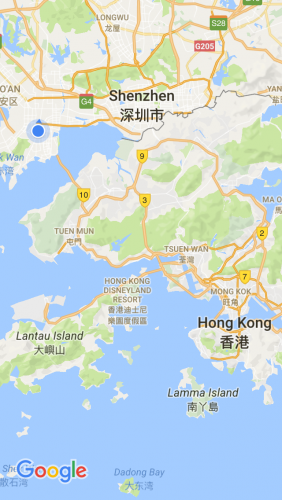 My Google screenshot...(see me, I'm the blue dot.)

Yes, my luggage was checked from Sioux Falls through Hong Kong to the port at Shenzhen.  Because of my controlling personality, I was extremely nervous that it made all of these handoffs – but it made the trip without any problems.

We went to Shenzhen to visit possible new phone manufacturers. When we purchased the cell phone company, there was only one phone to choose from. Since then, we’ve been able to expand our product line.

Our goal was to find another company to help us add product lines to our current offering, specifically in the area of flip phones or smartphones that we could private label. 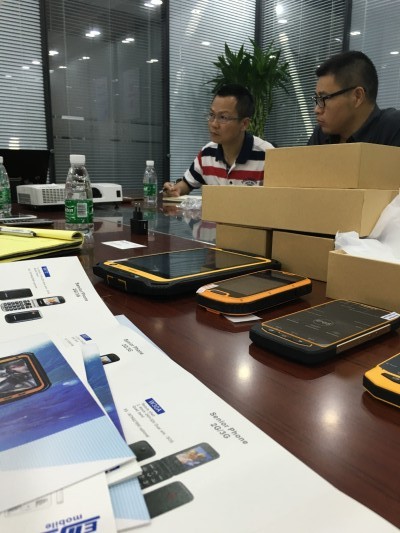 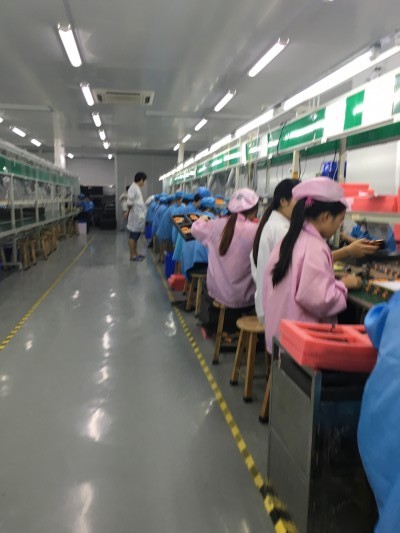 We had a Chinese employee who went by "Jordan" on the ground that helped facilitate business in China, including his serving as a communication liaison for everyday business dealings.

The most important thing Jordan helped with is finding and arranging meetings with potential vendors.  The verbal and written language is very difficult for Americans to overcome without help from a guy like Jordan.

When we think about manufacturing in America, we visualize sprawling, metal, one-story buildings.  In China, nothing is one-story because of the scarcity of land.

Everything in China is supersize.  When I say everything, I mean everything. Especially the cities.

Take a look at the enormous scale inside the Shenzhen airport.

I’m always surprised how many people live and work in China – 1.4 billion.  That number is 4x the USA!

It’s just a lot of people compared to the Upper Midwest.

After our time in Shenzhen, we traveled to Beijing on a two-and-a-half hour flight.

While in Beijing, we visited our potential partner for Aerionics. We visited the chairman of a company that we were seeking to develop a relationship with. I noticed one thing right away in Beijing.

The business climate is completely different than southern China.

Beijing is where all the money is sourced and controlled in China. The cities of Hong Kong, Shenzhen, Guangzhou are primarily manufacturing and shipping towns. A friend of ours calls it “a mixture of communism and unregulated capitalism” in this region.

It’s a different business climate, for sure.

"A friend of ours calls it “a mixture of communism and unregulated capitalism” in this region."

—Chad Hatch, on business in Beijing vs. other areas in China. 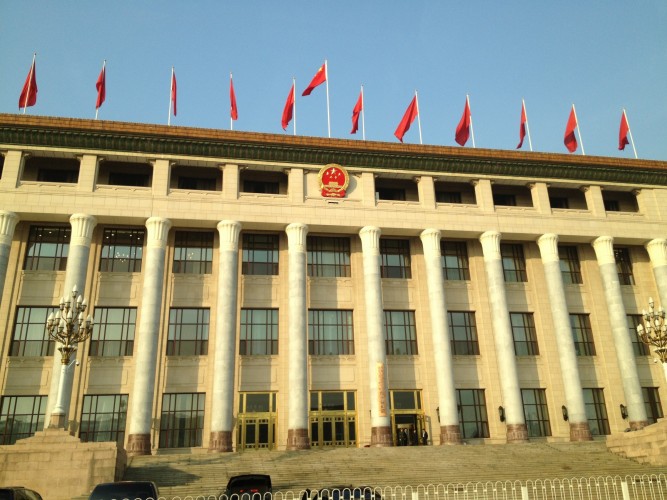 As for our business, we met with a private Chinese company called Beida Jade Bird, a company that produces portable gas detection products that are very similar to our Aeronics company, Macurco. The products would have been a nice fit for business.

In return for this exclusive agreement, they were hoping to invest in our company and gain an equity stake.

In the end, our team decided to move away from the exclusive “ask” and take it off the table. We didn’t feel it was in the best interest of Aeronics/Macurco to have a foreign company owning part of the company.

The deal was simply too complicated for a company as small as ours, especially one that’s still growing. There are even more reasons for our decisions here, but that’s probably a blog for another day.

It’s interesting, Chinese companies don’t know how to do business in the US very well. They know how to manufacture and they know how to ship their products out. But when it comes to handling business, it’s obvious their deficiencies in this area.

It’s best for them to ship their products to the US and let the US-based companies handle the customer side of the business. We simply know better how to sell here.

Visting the Great Wall of China

On the way to the gas detection manufacturer, we visited the Great Wall. 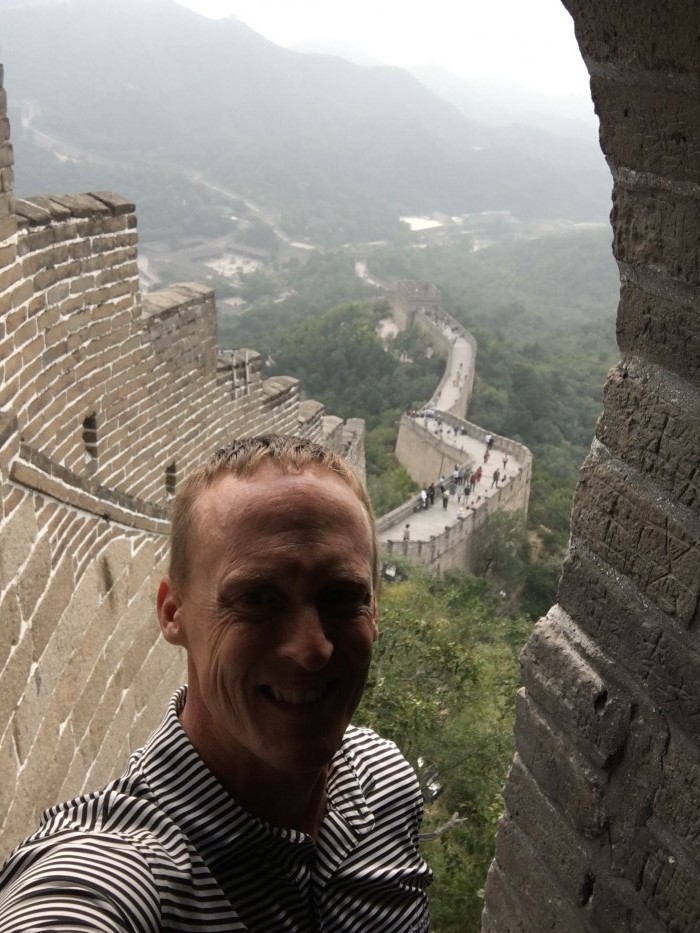 It’s hard to imagine that this wall was built 3,000 years ago. The wall is 5,000 miles across with another 5,000 miles of “fingers” designed to keep out the Mongolians and Russians from the north.   It’s amazing how this was built, without mechanization, with such precision and strength.

Again, when witnessing something so majestic like the Great Wall, it forces me to see the world through a longer-term view.

Remember—the USA’s current economy is only a few hundred years old. I say this to put China in some historical perspective. China has so much history. America is an incredible melting pot, made up of immigrants from all over the world. In China, it’s different. It’s easy to have an appreciation for their history.

In reference to the economy, our 325 million people generate the highest GDP in the world, but we’re only 5 percent of the world’s population.

Sometimes we get mesmerized and complacent about our "comfortable lives,” where we enjoy our freedoms. But we really are blessed more than a lot of the world.

When traveling to China, Haiti, and Central America, I’m very thankful for our economy and our freedoms. We are the envy of 80 percent of the world’s population because of economic freedom and our rule of law that protects all of us.

It’s something we could all take a little longer to appreciate.

I learned a lot on my most recent trip to China. I’ve been three times now and I’ve probably spent a total of 25 days in the country.

One of the main things I like about Chinese business is how focused they are. When meetings start, they get right down to business. It’s right up my alley.

I have noticed one thing that happens consistently in China though. The business people are negotiating everything all the time. Nothing is ever finished. They...always...negotiate... They are relentless in continuously advocating their position.

While being relentless in business can be a good thing (you know I love grit), it is a bit exhausting when trying to work with them. It makes it tough to keep moving forward.

In looking back, I was encouraged with our trip to China.

I look forward to going back. 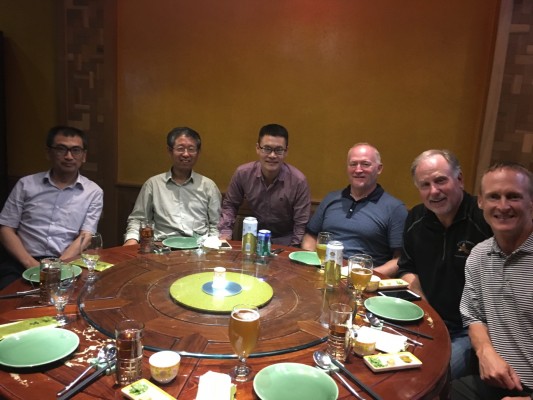 Learn more about everything we do here at Bird Dog Equity here.

We send periodic newsletters with insights about private equity, investments, and sometimes life itself.